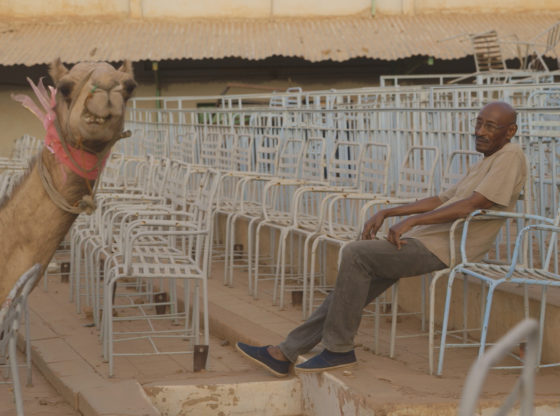 TALKING ABOUT TREES was one of 45 films shown in the section PANORAMA during the 69th BERLINALE in Berlin. It is a documentary film made by the Sudanese filmmaker Suhaib Gasmelbari about four aged renovaters of Sudanese cinema. Gasmelbari is the winner of two important prizes: PANORAMA PUBLIKUMSPREIS for the best documentary and the GLASHÜTTE ORIGINAL-DOKUMENTARFILMPREIS endowed with 50.000 EUR.

With the title TALKING ABOUT TREES the fourty years old director Gasmelbari is refering to Bertold Brecht’s poem AN DIE NACHGEBORENEN. Therein Brecht is warning his readers: When talking about trees is already dangerous in certain countries, then there are dominating horrible conditions. One of the four film-renovaters – old gentlemen between 60 and 75 years old – is quoting these lines when he wants to desciribe the political situation in Sudan. And his three friends – all cut from the same cloth – understand immediately the meaning of these words. They all have endured different dictatorships, different democracies, prison and torture like many other people in Sudan. But nevertheless they have maintained their invincible courage and their deadpan humour – though it is very unfortunate that up to now they are the only members of their newly created Sudanese Film Club.

Many years ago all four became the very first filmmakers in Sudan. Ibrahim Shaddad from Khartoum, where his father was a salesman, chose to study at the already in 1954 founded Deutsche Hochschule für Filmkunst Potsdam-Babelsberg in former GDR (today Filmuniversität Babelsberg KONRAD WOLF). There he graduated 1964 with HUNTING PARTY, an essay about racisme he shot in the woods of Brandenburg showing a relentless pursuit of a black man. For Shaddad cinema is socially minded and therefore very useful.

Suleiman Ibrahim El Nour, was born in Omdurman, the town which is forming together with Khartoum and Bahri a wellknown triangle. He has aquired his licentiate degree as film-director in 1973 to 1978 at the famous WGIK in Moskow. He tries to preserve a certain CINEMATIQUE LANGUAGE yet when today the shooting of films is mostly digital.

Manar Al Hilo – called THE BEAUTIFUL by his three friends – and his peer colleague El Tayib Mahdi, who always is wearing a hat, are both originate from Omdurman, too. As filmdirectors they both have graduated in Kairo in Egypt. Al Hilo is known by a short film he called A MAN WITHOUT SHADOW and El Tayib Mahdis best loved own fiction-film is called TOMB.

Mahdi also had worked a certain time in the ancient Sudanese ministry of culture. Till the overthrow in 1989. Nevertheless they all have returned anew to their homecountry were they are nourishing an old dream: Together they want to reanimate the old tradition of Sudanese cinema which once was really popular and greatly estimated.

When in some backyards the four filmdirectors arrange and organize little gratis-cinema-events, children react delirious with joy to the screening of Charly Chaplins MODERN TIMES. They make the spectators feel that it is big misery that the military coup d’etat in 1989 had closed  – now thirty years ago –  all the old admired Sudanese cinemas.

The Four themselves are dreaming to revitalize projections at the huge but ruined Open-Air Cinema REVOLUTION – where on the vaste place in front of the old sreen the adolescent usually play football. Even they promise that they really will come to watch when the filmdirectors will show DJANGO UNCHAINED.

During all four are waiting for the official permission to renovate the REVOLUTION outdoor cinema they are looking the bright sides of things in place of regarding all the politcal adversities. In the meantime Shaddad is explaining their plans of reconstruction to a camel that just is passing by on the vaste place in front of the screen where our four heroes have already assembled reams of metallic chairs.

How and when did the Suhaib Gasmelbari find these wonderful people? He reports that when after studying in France he came back to Sudan he naturally knew the films shot by the four directors. So first he tried to reach Suleiman by telefon. It was him who connected Gasmelbari with the three others.

He reports: „It was the first time that I participated with the four friends in a screening at a village near Khartoum. After they set up the canvas screen and the show started, sandy wind began to blow moving the screen left and right. Two of them (Manar and Ibrahim) quickly got up and sat on each side of the screen to anchor it down by tying both corners to their chairs. No one left despite of the wind. The audience continued watching the film engagingly. When the wind strengthened he blew up and deflated the screen like the sails of a small boat and sometimes the picture got out of frame and then comes back. I was watching the faces of both men as they held the screen while laughing nervously like sail men in a storm. I remember it clearly: It was then when I felt the necessity to make the film.